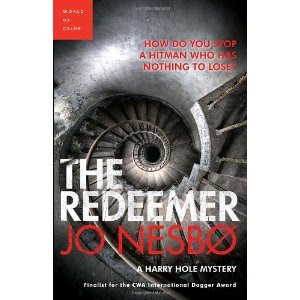 In The Redeemer, Norwegian writer Jo Nesbo spins plots, juggles characters and plays shell games with motives and motifs. He pushes the limits of plausibility and a plot’s ability – all for the sake of patterning.  Rife with coincidence, hair’s breadth escapes and role reversals, this mystery features a triple helix of hunter and hunted. Oslo police detective Harry Hole pursues a hired killer as he pursues his target, a Salvation Army Captain.
Craftsman Nesbo dazzles with playful plotting and skillful spiraling.
The story begins in a toilet stall (and ends there too) with a character imagining the stars beyond the roof while the worst happens. In 1991, a 14-year-old girl is raped while at Salvation Army camp.   We know what happened, but are not sure who did it to whom or why; in typical Nesbo fashion identities and motives stay concealed for a very long time.
Jump ahead to 2003 and read a series of short scenes written in the style of the Exquisite Corpse exercise, a collaborative writing game developed by French surrealists in which each writer pens a segment, folds the paper to hide all but the last part before passing it to the next writer who continues the story.
How does a single writer play such a game?  Chapter 2, Dec. 14, 2003. A man -- a hired killer -- sits on a train in Paris, remembering the amputation of his father’s leg in Vukovar, and then imagining freedom. “The doors open.”
Segment break. Then: “Harry stepped onto a platform inhaling the warm underground air.”  Harry, it turns out, is in Oslo.  His segment ends with him ringing a door bell.  And the next begins with Captain Jon Karlsen of the Salvation Army begins ringing a door bell on another Oslo street.  An on it goes, linking each segment as if the writer only saw the last sentence of the previous segment.
As the chapters proceed, the tight transitions loosen and other kinds of links take over – the color red appears in the last paragraph of one segment and the first of another; in a chapter called Mealtime characters sup unbeknownst to each other in different segments, simultaneously eating in soup kitchens, at home or in restaurants.
Gyres of motifs widen and narrow; sometimes threads spin so tightly, they blur. Or the reverse -- one seems two or more as happens when the hired killer, nicknamed the little Redeemer as a Croatian soldier during the Serbo-Croatian War, shoots Robert Karlsen, a soldier in the Salvation Army while he tends a kettle at a band concert in a crowded square:   “He took aim. The man by the cooking pot blurred into two. He relaxed and the figures merged back into one.”
When Hole is called to the case; the chase begins. Though done by a professional, the killing proves far less than the perfect crime. Weapon disposal becomes problematic, then further complicated by retrieval. The killer almost gets away, but is delayed leaving the country. When he sees a photograph that reveals he’s killed the wrong family member (mirroring a family photograph that has already revealed a mistaken killer in a minor subplot) the Redeemer decides to finish the job and stays in Norway.
He almost gets away with it a second time by merely finding out where Jon Karlsen lives and going to kill him. But who is lurking behind the door? A last-minute intervention saves Karlsen, and the Redeemer slips away to continue his pursuit. With Harry on his tail, he can no longer use either his passport or his bank card. This leads to a number of creative clothing and lodging choices – with Harry and his team just a breath behind.
Cut to the chase.  Nesbo throws in every near-miss trick in the book as he shuffles criminals and crimes. Add to the dazzle. Throw in a little sexual attraction – Harry finds Martine, daughter of the Salvation Army commander, very alluring.
Doublings and triplings of characters and possibilities are on display. The investigators believe there may be two killers or just one. Characters pass for one another; they look alike or behave in similar ways.  Sometimes it’s just the opposite, they appear as each other’s alter egos or they reverse roles.
Themes of lust, ambition and greed also spiral and whorls of subplots abound.  Nesbo plays on the many variations of love and sex.  Jon Karlsen is engaged to Thea Nilsen, also has an interesting relationship with a married woman, Ranghild,  as well as . . .  Harry still loves soul mate Rakel, but from a restrained distance. He has a one-night stand with one woman and liberating lovemaking with another.
The initial rape is mirrored in the present day and then mirrored again in a homosexual encounter where for a moment, lust and greed, killer and rapist, collide violently.  Who spares whom?  And why?
Ambition plays as a motive in another subplot. Two candidates vie for a senior position in the Salvation Army, a pattern established by another generation of aspirants.  (Ranghild seesaws between using her sex to fuel her ambition and idealizing love).
Greed may play a part in solving the plot. The Salvation Army holds valuable real estate that others could make money on.
Fine doublings take over. One hunted becomes a hunter.  Another, who is hunted, sleeps in his pursuer’s bed. (At times the reader feels like Goldilocks, arriving at a home, an apartment or an alternative shelter only to wonder what we may find behind the door and who may be (or has been) sleeping in the beds?)
Once again Nesbo indulges his preference for physiological aberrations.  As established in previous books, colleague Beate Lonn possesses an over-developed fusiform gyrus that gives her the unusual abilities to remember all faces. This unique crime-solving perception is disabled here by an equally unusual facial condition.
Then two of the other women in the case have unusual eyes. Ranghild has eyes of a unique color; Martine’s have an unusual trait in the pupil.

As if this all this isn’t enough there’s the backdrop of Serbo-Croatian war and the slaughter at Vukovar, the effects of immigration on Oslo, the encroaching Oslo drug culture and the aims of two different armies: one, liberation; the other, salvation or at other times, salvation versus redemption.  It’s ultimately a story of lust and greed, rape and payoffs, captains in an Army of good deeds, and assassins with skills learned in a brutal Civil War. Finally, there’s a larger arc around the basic arc of the novel, a one from previous books in the series. Harry’s former boss Bjarne Moller appears at both the beginning and end of the book, tying the book together and also linking it to the larger series. Nesbo allows him to give voice to the dangers of redeeming and saving the world and how easily lines blur and one can become that which one despises.
There is so much to admire in the writing, but ultimately it’s detecting that is most pleasurable for the reader. When we discover the fictional patterns, we feel smart; we’re such good readers. We share the kind of the pleasure Harry Hole must feel in seeing criminal patterns. We care less about  finding out whodunit and why than discovering how Nesbo has done it so spectacularly.
Posted by wellwell2 at 4:38 PM