Who ain’t a gambler in the glorious Orient, with his very life? 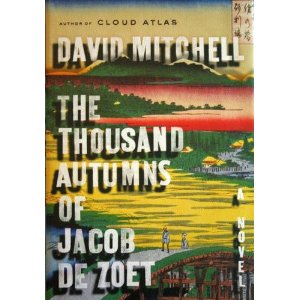 About suffering they were never wrong,
The Old Masters; how well, they understood
Its human position; how it takes place
While someone else is eating or opening a window or just walking dully along …
They never forgot
That even the dreadful martyrdom must run its course
Anyhow in a corner, some untidy spot
Where the dogs go on with their doggy life and the torturer's horse
Scratches its innocent behind on a tree.

--- Musee des Beaux Arts  W.H. Auden
On the cusp of the 19th century and the verge of change, an honest clerk, Jacob de Zoet, arrives in Dejima, an artificial island off the coast of Nagasaki, Japan. The island serves as a remote trading post for the collapsing Dutch East Indies Trading Company, headquartered in Batavia, (modern-day Jakarta).   Shut-off Japan is called the “Cloistered Empire,” the Tokugawa Shogunate’s reaction to attempts by Portugal and the Spain to bring commerce and Christianity to its shores.  No Japanese may leave and return to the island on penalty of death; foreigners are rarely allowed onto the mainland.
Such is the exotic, isolated setting of David Mitchell’s The Ten Thousand Autumns of Jacob de Zoet.  The island hosts a small community of company officials, seafaring rogues from many nations, Japanese whores, interpreters and spies.  In addition, the American Captain Anselm Lacy and the motley crew of the Shenandoah, and Japanese lords and magistrates interact with those on Dejima.  The world is in flux.  Elsewhere democracies are being born. Enlightenment ideas including medicine and science are spreading.  Dutch influence is waning and the British Empire is expanding.  Dejima, where many nations and religions are represented and cultures cluster, nestles next to a land unchanged for centuries – one poetically referred to as the land of Ten thousand autumns or Root of the sun.
Jacob is charged, under the leadership of Unico Vorstenbosch, with scrutinizing the cooked books and the crooked practices of those stationed in a place where everyone gambles, often with their lives, and the future of the company and the Dutch empire is at stake.
De Zoet becomes the butt of jokes, the subject of other’s schemes, the scapegoat for Vorstenbosch’s actions and the loser in rigged card games.  But he’s nobody’s fool in commerce. He quickly learns to counter through observation and disarming moves of his own. The same does not apply however, to romance. Though De Zoet has promised to marry Anna who waits in Holland, he’s a fool for love as he falls for the one Japanese woman on Dejima who is not a whore or a whore’s helper. Aibagawa Orito, a disfigured midwife, successfully delivered an infant to a local magistrate, thus earning her wish to study with Dr. Marinus, Dejima’s Dutch doctor.  Skeptical Dr. Marinus, tests De Zoet’s intentions and desire for friendship in the most humiliating of ways.  De Zoet, In turn, uses Marinus and an interpreter, Ogawa Uzaemon, as go-betweens to arrange meetings and send letters.
All of the small maneuvers and counter plays of the Dejima dwarf to child’s play when De Zoet meets Lord Abbott Enomoto and conflicts in commerce and romance intertwine. The heart of the novel moves to a cloister deep in the Cloistered Empire, where an eerie cult worships at an ancient temple. The novel takes on the darker shades of dystopian literature – motifs in common though to creepier effect with Lois Lowry’s The Giver and Kazuo Ishiguro’s Never let Me Go.
David Mitchell writes with great sweep and fine detail. He explores issues like slavery – sexual and otherwise, the uses and abuses of religion, the exploitation of resources and people, the relationships of father and son, children of mixed heritage and the dynamic nature of history all within lively storytelling.  At times this historical novel reads as a story of courtship and love – complete with a triangle, at others as a robust adventure tale of exotic lands and seafaring scoundrels, as a fair-lady rescue drama, a tale of sacrifices by both fathers and children and as a David-versus-Goliath battle story.
While The Thousand Autumns of Jacob De Zoet is story strong and grounded in historical fact (fire, earthquakes etc. , and the attack of a British ship named the Phaeton all did in fact occur), adventure and romance take place as in a painting revealing the bustle of busyness, the distractions (though not indifference) of  ordinary life.
The world is alive with activity just as Auden suggests it is in paintings by the “old masters.” There is always something going on beneath the dialogue, on top of the observation, around the action. Rats rut in the rafters while Jacob tries to concentrate on his work, making him think of women.  While Jacob tries to sleep this is what he hears: “Night insects trill, tick, bore, ring, drill prick, saw, sting./ Hanzaburo snores  in the cubbyhole outside Jacob’s door.”
And like the Flemish painter Brueghel’s "The Fall of Icarus," there is a sun myth that involves fathers and sons in the book’s climax, though not that of Icarus. It is the myth of Phoebus and his son Phaeton – a child of mixed heritage who struggles to prove his paternity. This myth’s pattern is reversed by the ship Phaeton’s drugged captain as he attacks Dejima and sees Jacob courageously take a stand.
Sometimes action is layered into storytelling, the way an actor engages in some telling stage business.   A card game, a billiards game and the game of Go are all played out both physically and verbally and more is at stake than meets the eye.
Mitchell uses the same layering technique of gambling games and action as the interpreters do their work. Language and renaming, Interpreting and reinterpreting in order to dominate, control, deceive or deflect, is one of many ways some maintain power.  Renaming for evil purposes peaks in Enomoto’s temple.
But translators and Enomoto are not alone in relabeling or using language for one’s purposes.  While De Zoet becomes DaZuto in Japanese pronunciation, Domburger— a term referring to Jacob’s provincial home is used initially pejoratively by Marinus to put Jacob in his place.  Thus, The Ten Thousand Autumns of Jacob de Zoet could be called DaZuto’s Japan or even Domburger’s Dejima but both of the later would lessen the eloquence of the story’s meshing of historical sweep and individual life.

Mitchell uses an odd metaphor when De Zoet first meets Enomoto: “Jacob finds himself as little able to evade the man’s gaze as a book can, of its own volition, evade the scrutiny of a reader.” Yet Jacob, hired as a scrutinizer of account books turns his talents to discovering the truth by learning Japanese.
Indeed learning the language becomes key to Jacob’s solving one of the book’s major puzzles.  Over time Jacob works secretly (afraid he is committing a crime) and tirelessly to learn the language and translate a secret scroll.  By novel’s end, his commonly used Dutch/Japanese dictionary is known as a DaZuto.  When he leaves Dejima – less than a thousand autumns later but more than his original intended five years, Jacob leaves  reluctantly. He leaves behind  that dictionary and another product of this mixed world as well.  But in Japan he has nowhere to go, cannot stay, so he calmly sails on.