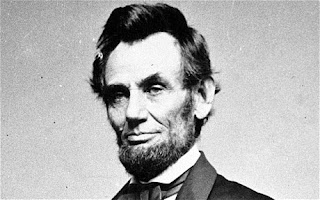 Lincoln
A single word on a Facebook post.
As if to say: Wow.
Or: What more can I say?
So much has been said about this wonderful film and Daniel Day Lewis’ extraordinary presence as Lincoln, a gently humorous, thoughtful and kind strategist. A presence so palpable, it hardly seems a performance at all.  But as performance commenters including those under that post suggest, it’s Oscar worthy.
I concur.
Lincoln.
What more can I say?
(A tiny bit more, obviously.)
I went to the film because of the buzz, but confess I didn’t know what to expect, or even what the film was about. Not the Civil War. Not the Gettysburg Address, Not the assassination. Sitting in the theater I found that it focused on the passage of the 13th amendment that states:

Section 1. Neither slavery nor involuntary servitude, except as a punishment for crime whereof the party shall have been duly convicted, shall exist within the United States, or any place subject to their jurisdiction.

Section 2. Congress shall have power to enforce this article by appropriate legislation.

Wow.
Not only is this amendment fundamentally American and a triumph of the human spirit, but it also foreshadows subsequent liberations – the Suffrage movement, Civil rights, The Women’s movement, Gay rights.
If I’d prepared a little more and read about the film, I would have known that it was based on Doris Kearns Goodwin’s Team of Rivals: The Political Genius of Abraham Lincoln. (For those who like knowing a lot or want to recap after seeing the film, Wikipedia has a pretty thorough entry on the film.)
But sometimes, lack of prior knowledge leads to greater awe.
I think that’s true for me with Lincoln.
What amazed me most – next to Day-LewisLincoln’s presence – was Spielberg’s vision.  The young director, who became famous with a film about sharks circling in the waters off Cape Cod, has in his maturity shaped a film wherein the drama is in negotiation, compromise, back-room deals and argument. Where the climax is a vote in the House of Representatives.
Where politics is (almost) a noble activity!
Imagine that.
(How might one film today’s Congress?  Horror film?  Rigid Walking Dead zombies, unable to compromise, driving a survivalist Middle Class over The Fiscal Cliff?)
Anyway, before I took that swipe at today's obstructionists, I was thinking about Tommy Lee Jones as Thaddeus Stevens, the ardent Abolitionist, and the sharks that try to encircle him, to ensnare him, to lure him overboard with his own emotional rhetoric, his own uncompromising beliefs.
New York Congressman Fernando Wood, master manipulator, almost succeeds, but Stevens turns the gotcha moment against tormenter Wood and his colleagues.  As he does so, I cheer.
For me, the moment is the high point in rhetoric even as it jabs with name-calling and insult. (When all is passed, we savor sweet pleasure from a scene that gives a personal reason for Stevens’  fervor.)
Yet as I cheer when Stevens wins the verbal sparring, I am aware that he foils Lincoln who prefers making points by the subtler and folksier method of telling stories and direct appeal to others. No tirade. No put downs. I root for Stevens, but I prefer and admire Lincoln for his reserved, magnanimous methods and choices.  Lincoln is the better man.
Stevens is a good man too. He may take swipes of his own (who, but Lincoln,  can resist being clever?) and give adversaries a tongue lashing, but at least he’s just fighting with words.
When men can no longer settle differences in words, they may opt for violence; when that’s groups of men (and now women), that may mean war.
Such a war, the cost of anger and rigidity,  frames the movie as it did Lincoln’s negotiations in the final months of his life. Lincoln opens with scenes of the gruesome Civil War and near its close revisits a battle-weary world full the dead, the wounded and their severed limbs.
Lincoln, however, is not about the war, or violence.
Perhaps that’s why Spielberg shields his audience from the event we all know is coming -- Lincoln’s assassination.  We don’t need to see it -- so we don't. Like Lincoln, Spielberg, the story teller, practices reserve so as not to overpower us with grief for the man we lost, but rather to help us admire Lincoln and what the world gained in four short months nearly 150 years ago.