I am almost half way through Donna Tartt’s The Goldfinch, having joined the virtual challenge at classicvasilly on wordpress. 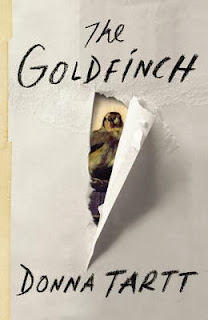 I panicked when I joined last Sunday thinking oh how am I going to get through this big fat book by year’s end? So I put aside the very slim Olive Kitteridge, which I was loving.
I needn’t have worried. How different my readings of these two books are. Even in my current highly-distracted-by-life state, The Goldfinch absorbs me. I fly through these pages because the story propels, the characters engage, the settings engulf me --  they are filled with rich and palpable detail. What a great story of orphaned and half-orphaned children, those whose lives are upended and displaced by the death of one parent, or both. In his review of this book, Stephen King compares Tartt to Dickens and says he won’t be the last to do so. So let me say “ditto.”
My reading of Olive Kitteridge is much slower. I read through Olive’s prismatic character; each chapter is a linked short story that subtlety or otherwise reveals some shade of Olive’s self. In some chapters, she’s merely peripheral; in other’s dominant.  But this, for me is slow reading as I piece together this wonderful, somewhat crotchety retired schoolteacher living, as I once did, in a small Maine town.
What’s next: I am looking forward to both looking back on the year and looking ahead to some goal setting—so unlike me. I am considering new challenges.


Happy holidays bloggers an others. I have learned so much from all of you this year.
Posted by wellwell2 at 7:36 AM 5 comments:

Today:
I’m glad: I don’t live in Maine anymore, where the temperature is in the teens and the snow is piling up. Central Virginia is a lovely place to live – it has seasons, but the winters are mild. Just right for this time in my life.

This week:
Finished: my Coursera class on the historical novel. I listened to my last lecture. I liked the class, especially the lectures. Best book for me was the last one: The Ghost Bride. It’s also one that crosses genres and perhaps, the historic part is the least dominant for me.
Reading: Melanie Benjamin’s The Aviator’s Wife, which I find mediocre.  Reading for book club. Another so-so New York Times best seller. It’s a fast read and does highlight the life of Anne Morrow Lindbergh as well as what marriage was like in the first half of the 20th century for a woman, gifted in her right, who was married to one of the most famous men of their time. Also: Celebrity and paparazzi problems; baby kidnapped; Nazi sympathizer; polygamist etc.
At the book’s midpoint, I’m wondering if it isn’t a bit presumptuous to put words into the mouth (first-person narration) of a woman who just died in 2001, who was a writer in her own right and whose children guard the family’s privacy.  Daughter Reese Lindbergh, also a writer, is the notable exception. In addition there’s A Scott Berg’s biography, titled Lindbergh, which won the Pulitzer Prize and which apparently goes into detail about the marriage – but not the secret families.  Why wouldn’t one just read that and Anne’s and Reese’s own writing (all of which I haven’t done, though I confess I am now intrigued by Gifts from the Sea)?  Probably won’t; I’m not that interested in the Lindberghs.
Conclusion: Might be good for adolescents, but not for serious readers.
Also reading:  Elizabeth’s Strout’s Olive Kitteridge. How did I miss her books when they came out? Lovin’ it. I’m identifying with the territory.  I too spent a lot of time around a Cook’s Corner in a small Maine town.
Looking forward to: Donna Tartt’s The Goldfinch.
New to me: Reading books on Kindle. Doing okay.


Listening to: Audiobook—John Boyne’s The Absolutist.
Looking forward to: End of year round-up, new challenges
Posted by wellwell2 at 10:53 AM 10 comments:

Getting ready for:  an indoor day – and possible power outage. My blankets and books are nested around me.
Completed:


Working on: a review of Katherine Howe’s The Physick Book of Deliverance Dane.
Reading: Olive Kitteridge.  Didn’t read it when everybody else did. I did reserve it once at the library and then missed the call. So now going back.
Considering reading: Beautiful Ruins, The Goldfinch, Aviator’s Wife (book club) The Boys in the Boat.