As life passes by, some get sidelined in Gene Kerrigan's "Little Criminals"


One evening in in my late 40s, having worked for a small newspaper in a small town for more than 15 years, I told my husband I was wondering what to do with my life.
“Do,” he said. “You’re doing it. You’ve peaked.”

This review also appears at http://europachallenge.blogspot.com. I am participating in the Europa Challenge.
Posted by wellwell2 at 12:28 PM No comments:

A good reading week. A good writing week.  Wrote a review of Bring Up the Bodies and then quickly read a mystery by C.J. Box. Nowhere to Run was a random pick for me –what was available at the library.  Wrote a bit about that too – not quite a review, just my so-so reaction to the book. Despite the so-so reaction I tore through this book and I looked forward to returning to each time I had to put it down.  It held my interest, but not my thinking.
So happy to be interested in writing again.
The contrast in the way I read the two books got me thinking about the pace of reading. Bring Up the Bodies was a long slow read– a comfortable stroll, where I stopped and admired the sentences, checked and rechecked the characters and succession lists and even the googled images of the historical figures. I used Wikipedia like a field guide when I wanted to know a little more about the history.  The stroll took me to slightly familiar territory that I hadn’t visited in a long while, one I hadn’t seen quite this clearly before. I marveled at the deep literary and historical views.
In Box’s book, I was frequently on horseback –like its hero, Warden Joe Pickett. But unlike Pickett, I was on an out-of-control gallop crashing through the woods, wanting to take in the beautiful scenery but more focused on the dangers and the violence that lay ahead.
Finally, I went alone to see Life of Pi, at the movies. It’s one of my favorite books, one I once taught and fell in love with as I took students through it ever so carefully, chapter by chapter. Perhaps that’s why I found myself a little disappointed. While I thought the movie was well done, ever deserving of the praise it’s garnering, I missed the depth of the reading experience.
Posted by wellwell2 at 5:11 AM 7 comments: 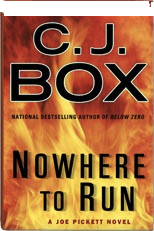 I didn’t know what I was getting into when I took on C.J. Box, as a new author – and I’m not sure, now that I have just closed the cover of my first, Nowhere to Run, that I know yet. How do I feel? I think tricked might be one word, or trapped perhaps – into feeling like I should somehow feel tolerant of extreme and shallow right-wing sentiments that made no sense to me before I began this book and make even less now.
The shallowest of those sentiments – come out of mouth of Diane Shober, a young woman who went out for a trail run while training for Olympic trials and never came back even after an extensive, and likely very expensive, government search.
This is the kind of tangential political pabulum that comes out of this girl’s mouth: “But when I was running, I went a lot to Europe. I got to experience socialism firsthand. At first, it’s seductive. Free health care, free college, all that. But nothing is free. And anything that’s free has no value.”
Really?
Game warden Joe Pickett discovers her living freely on government land near survivalist twin brothers who put Pickett through a harrowing near-death pursuit that begins when he tries to ticket them for fishing over the limit and without a license.
Her motivation: (spoiler alert): Demanding dad was pushing her so he could live through her the Olympic moment he lost out on-- the only way to rid herself of her overbearing father is to vanish.  Oh and she read Ayn Rand and bought into her Objectivist philosophy -- even her mother describes her as selfish and self-centered to begin with so this wasn’t difficult.  (Dear mom, who is genuinely grieving, does get a reassuring postcard thanks to her concerned daughter.)
Box builds the self-absorption into the character. I’m okay with that. How anyone thinks she could have made the Olympics given how little spine she displays is beyond me, but it’s the worst of many muddled inconsistences of character.
I just don’t understand why Warden Pickett lets her ride off without explaining herself – and getting her to pay “the government” back for two or three major search and rescue missions. And wouldn't she want to vindicate the brothers?
I’m still looking for a character I can grab onto and like a little – someone who has at least one honorable trait or motivation I admire.
Where to turn?
Not the Brothers Grim, the survivalist twins, fleeing real injustice over eminent domain property rights, injustice perpetrated by a land-grabbing developer in cahoots with a corrupt Senator. That developer happens to be Brent Shober, Diane’s dad, a cut-throat capitalist who exploits bad laws and political connection to get whatever he wants.
Box tries hard to neutralize negative reactions to the brothers and comes up short. Perhaps Pickett was overzealous in his pursuit, but they slaughter horses, assault and leave him for dead. I feel bad for those bullied by crooked politicians – who somehow get twisted into seeing all government as BIG BAD government, and I also feel bad for serial killers who were bullied as children, BUT . . ..
In Box’s world of I-can-do-whatever -I damn-well-please individuals, no one stands out as sympathetic.
Not outlaw Nate, a fugitive buddy of Joe’s that I don’t get enough info about to feel anything one way or another.
Not Pickett's overwhelmed wife Marybeth and girls– though I like all of them a little.
Not the many politicians.
Not the hired killer-contractors.
Not the bumbling opportunistic Farkus, though I do find him most amusing along with Joe’s overbearing mother-in-law.
For a while I think Pickett's okay, but his motivations are alternately I'm just doing my job, I took an oath,  Or I'll do it for the distraught mother.
Maybe I should admire the noble bow hunting poachers who started this whole mess when they turned themselves in to complain that the body of the elk they shot, disappeared.  But they don’t make sense to me either. Why would they do that?

I could whine on, but more would be disingenuous.  While reading, I enjoyed this book and I’m likely to try another – from the library. Truth is Nowhere to Run was an entertaining page-turner for me – and as long as I didn’t think about the book and its muddled characters with their muddled motivations, I was highly engaged.  As long as I didn’t think it might offer me any insight on the issue of property rights, I could consume it the way I occasionally enjoy fast food. And I loved getting to ride through the Sierra Madre and see a new part of the country.
Posted by wellwell2 at 10:20 AM No comments: 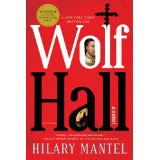 I have spent the last 3 weeks in England. First London I in the ‘70s in Ian McEwan’s Sweet Tooth – working at MI6 in literary and romantic intrigue.
Then I’ve alternated between Thomas Cromwell’s England – at Henry VIII’s court, his own home at Austin Friar as well as others’ manors and homes – noble and otherwise in Wolf Hall.
Finally, Charles Dickens has led me through Victorian England’s layers of society in Bleak House while I’ve driven from Massachusetts to Virginia and on errands around home.

Sweet Tooth
Sweet Tooth is a literary spy novel—highbrow James Bond --featuring a beautiful young woman, Serena Frome and her secret literary mission – the promising writer Tom Haley.  Full with interesting complex short stories that act as clues to Haley’s personality and an ending that projects beyond the end of the book and leaves one savoring the sweetness of the romance within it.

Wolf Hall
I don’t read a lot of historical novels, but picked up Wolf Hall at a library sale for a dollar last year thinking I do well with most prize winners, and this one had won the Booker a few years back. Started it. Dropped it. It was too big, too thick, too many characters, too many locations.  And all that complicated succession background that I have to review each time I dip into English history. At the time I needed shorter, tighter plots.  Quick, but layered reads.
I picked Wolf Hall up again just after Christmas, thinking I have time now and Mantel has once again won the Booker for part two of this planned trilogy, Bring Up the Bodies. Must be good.
So I tried again. Glad I did. I sunk deeply into this wonderful book, wandering with Cromwell in his world. Machiavellian expediency and a humane heart balance the book, the man.  While Cromwell’s interactions with Thomas More emerge as a central conflict in the book, the fuller human portrait of Cromwell as a son, husband, father, apprentice and  mentor anchors it. Henry VIII’s court may be where his mind solves the political business of the day, but home at Austin Friars is where his heart is.
I am working on a review and will post soon.
Bleak House (audiobook)
I am happy to be listening to a classic. It’s been a while since I have taken one on and I think that decision is a direct result of reading others’ blogs.  I had forgotten how much I like Dickens’ caricatured characters; how they so successfully hover between their exaggerated single traits and their detailed descriptions. As in Wolf Hall, I marvel at the breadth of society represented. There are so many people  that I need to repeatedly look them up as I listen/read. (In Wolf Hall – the cast of characters and Tudor and Yorkist charts at the beginning of the book are helpful – as is Wikipedia.  For Bleak Hall, I used the internet Spark Notes to review characters when I needed to.  I also found a nice Pinterest board on Wolf Hall that showed pictures of many of the characters in the book.) I have only a few more hours of listening left.
That’s an update on reading/listening. Where next? Back  to the USA – and mysteries. I have taken a few CJ Box mysteries out of the library as he will be visiting the Virginia Festival of the Book, and I am considering going to hear him. I have followed Paul Doiron’s Maine warden, Mike Bowditch and have long been aware that Box offers another warden series. I just begun with Nowhere to Run, but already the difference in the landscapes of Maine and Wyoming is striking. (Consider transportation alone horseback vs. snowmobiles).
Finally, inspired by blogs and others, I have chosen a challenge. I plan to follow the Europa editions challenge and commit to six books. I am beginning with mysteries again – those of Gene Kerrigan.
Posted by wellwell2 at 7:44 AM 7 comments: