Finished John Green’s The Fault in Our Stars on audio. Readers probably know that this wonderful YA book tells the love story of Hazel Grace Lancaster and Augustus Waters, who  meet at a support group for teens who have cancer.
As in Muriel Barbery’s  “The Elegance of the Hedgehog,” the exchange of culture – in this case a book called  “The Imperial Affliction” has a magnetic effect on the relationship. Green captures that stage of falling in love that’s about sharing one’s obsessions for favorite things. An Imperial Affliction, the fiction within this fiction, is also about a young person dying of cancer; it ends ambiguously mid action. Hazel Grace wants desperately to know what happens to the other characters after the death. So desperately that her quest becomes the action that drives the plot.
One of the book’s motifs is the art of fiction, how it mirrors reality, is not reality, but can be so real in the mind’s eye.
As I listened I couldn’t stop thinking about an essay I read last fall in the New Yorker.  I went online and read “The Box and the Keyhole” by Brad Leithauser again.
In it Leithauser has a discussion with his daughter who is so thoroughly taken by a story they listen to that she wants to know what her dad thinks a character is “really like.”
In the essay, Leithauser reflects on how we read differently as we age and grow sophisticated and critical. When we read as children we read with belief:
Had I been still more articulate, I might have said that there’s a special readerly pleasure in approaching a book as you would a box. In its self-containment lies its ferocious magic; you can see everything it holds, and yet its meagre, often hackneyed contents have a way of engineering fresh, refined, resourceful patterns. And Emily might have replied that she comes to a book as to a keyhole: you observe some of the characters’ movements, you hear a little of their dialogue, but then they step outside your limited purview. They have a reality that outreaches the borders of the page.

Other reading:  I reviewed Gene Kerrigan’s The Rage, which is likely soon to be all the rage. (You can read review below). According to its publisher, Europa Editions, it’s climbing the best-seller lists. Europa is launching Europa Noir and has a newish Facebook page for those who follow or want to  “like” it.  Search for Europa Noir on Facebook.
I am just about finished with The Kerrigan’s The Midnight Choir, which I will likely review some time next week. That will complete the three Kerrigan crime novels currently available from Europa Editions.
Finally, I took a long car trip and began listening on audio books to Jon Meacham’s Thomas Jefferson The Art of Power.

Information has its costs in Gene Kerrigan's The Rage 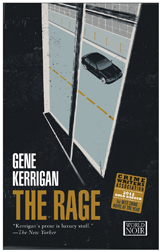 Email ThisBlogThis!Share to TwitterShare to FacebookShare to Pinterest
Labels: Gene Kerrigan, The Rage


We enjoyed the comfort of watching the great blizzard on television from the comfort of couches in Virginia. We missed the excitement of a great storm—waiting in line at the supermarket the night before the hyped big one, filling the bathtub with water, hunkering in, watching whirls of white blastagainst kitchen windows and hoping the electricity wouldn’t fail --  an excitement we felt when we lived for so many years near Portland, Maine. Snow fall records were broken in that great small city.  Snow we are glad we are not shoveling today.
Nevertheless, we acted a bit like Saturday was a snow day. We lounged for hours with books, coffee, computers and the TV remote.
Still reading. Still luxuriating in the afterthoughts of reading and composing those thoughts into words.
This week’s harvest: books read: Ian Rankin’s Bleeding Hearts, Gene Kerrigan’s The Rage; listening to audiobook I should finish in the next few days: The Fault in our Stars.
I have thrown myself into the Europa challenge. I thought I might read 6 books this year. Already I have read 3 and have two more piled in the TBR pile. I am enthusiastic, like a kid wanting to ride a new bike as much as possible. The quality of the writing is remarkable even when I’m not particularly fond of a book as I wasn’t with The Elegance of the Hedgehog. I could certainly see why it garnered so much crtitical attention in Europe and here. I am currently writing review of The Rage.  I’m very drawn to Kerrigan’s writing and I only wish there was more of it. A lot more.   Looking forward to “The Midnight Choir,” one of those books in my TBR pile.
One goal I have not met, and maybe I should abandon is finishing half written reviews of books I read during the time I was not posting. Some are so close, it seems a pity not to post them if only for my own satisfaction.

Muriel Barbery's "The Elegance of the Hedgehog" explores matters of taste

This review also appears at http://europachallenge.blogspot.com. I am participating in the Europa Challenge.