About two-thirds of the way through Patrick Hamilton’s Hangover Square, this reader wasn’t sure she could hoist another page. What kind of person keeps reading page after page of drunken bouts, page after page of the plight of a fool taken advantage of and humiliated by the cruelest of glamour girls and her hangers-on?
Well me, a reader drawn in by back cover praise by Doris Lessing: “Patrick Hamilton was a marvelous novelist who’s grossly neglected. . . He wrote more sense about England and what was going on in England in the 1930s than anybody else I can think of, and his novels are still true now. By Nick Hornby: “His laconic narrative voice is always a pleasure to read, and as a social historian he is unparalleled. By others such as J.B. Priestly, Francine Prose. 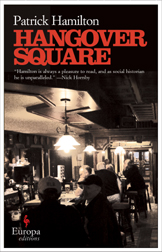 Working, swimming and gardening a lot lately. And thinking about violence. Just finished my review of Patrick Hamilton’s Hangover Square, a reissued novel (Europa edition) that takes place in London on the eve of World War II. Hamilton, who may be best known for his play “Gaslight,” that was turned into a movie, is considered by some as an undervalued writer. I found his work forceful even as I wasn’t sure what to make of it. It lingered long and with events of the past week allowed me to think about how riveting and immobilizing violence and cruelty can be.
I also finished Jean-Claude Izzo’s Total Chaos, another in the Europa Noir series, another that intersected with my thoughts about the unraveling violence of the week. Total Chaos is the first of the Marseilles trilogy and features Fabio Montale, a cop whose childhood friends have become part of the violent underworld in this city of immigrants. Marseilles, vibrant seaport of gustatory pleasures and beautiful women, may be a French melting pot for those who come to seek better lives – Italians, Neopolitans, Spainards, West Indians, North Africans and Arabs, but it’s a pot that simmers, always on the verge of boiling over. While Fabio turns against violence, one friend Ugo, flees it – only to be dragged back, while the angriest of the three Manu is so enmeshed in it, he cannot escape. I plan to write a full review later, after some reflection.
I have just begun the second in the Izzo’s series, Chourmo, and am still listening to David McCullough’s John Adams.
Posted by wellwell2 at 8:09 AM 2 comments:

April 10, 2013
It’s August today in Central Virginia. Last week it was January. I’m not sure how the trees and the peas feel about it, but my guess is they’re as unpleasantly confused as I am.  Snow one week. Ninety-two degrees two weeks later.
We didn’t move to Virginia for the four seasons – as some give as a reason to retire here instead of say Florida, but it was one of the delightful discoveries I found my first two years here.
Oh that’s what spring is, I said  – bloom after bloom of bushes, flowers and trees beginning in the last week of February and seemingly continuing to early June. Mute greens and pinks, light roses and yellows soften the landscape. It was as if I’d heard the word but didn’t know what it meant after so many years of living in Maine. In Maine, where Gordon jokes they have two seasons – Tough sledding and the Fourth of July. In Maine where cold Aprils bring mud season that lasts until mid May when there’s Black Fly Season followed by summer. The daffodils bloom early,  lilacs and apple blossoms finally get around to it by late May – and then it’s summer – glorious Maine summers I admit (despite what Gordon says), but summer after all.
So despite the fact that I am enjoying short sleeves and shorts, I am  somewhat worried about the peas I (finally) planted last week and the tender lettuce leaves I’m afraid are already wilting in this heat. I am a little disappointed that we turned on the air conditioning yesterday – even though I know we will return to more appropriate weather soon.
What scares me most is a story I read sometime, somewhere on the internet that predicted the demise of spring – that an effect of global warming would be more jagged leaps between winter and summer. Kinda like what I left in Maine.
If spring mutes, can fall be far behind?
Posted by wellwell2 at 4:19 AM 1 comment:

Greetings all,
Activities that have gotten in the way of blogging: trips up the coast to visit family, starting work again (seasonal and part-time), working again, an extra little temporary job, exercise, reading, gardening, spring cleaning.
I knew all but the first were going to hit me again – but still I was unprepared as ever.  That is I let all these other activities get in the way of blogging. Truth is I like all of these activities so it is hard sometimes to keep blogging a priority. (Cleaning I only “like” sporadically, but for some reason it’s been high on my must do list lately so I need to take advantage of its appeal while the appeal lasts.)
And then I have another excuse for not blogging– an intermittent internet. I finally called our provider, who sent a technician who looked at the modem, the router and the connection outside and told me the problem is in the line underneath the street to our house – and they will have to dig up the road sometime next week to fix it. (Now, that’s a problem—but not ours, thank goodness.)
In the meantime, I listened to Tana French’s Broken Harbor and then moved on to David McCullough’s John Adams (still listening). My husband and I share the kindle now so I am slowing down in getting through books. We both are interested in brushing up our history as we live in area permeated by Thomas Jefferson.
In pursuit of my new love for Europa Noir Editions, I read Hangover Square, a reissued London crime novel by Patrick Hamilton, which I plan to review this week and Jean-Claude Izzo’s Total Chaos, the first book in his Marseilles trilogy. I am reading my way through Europe – dark Europe and recent history, dark history. I love it and am getting a new itch to plan travels.
Sunday Salon is a group of book bloggers who meet onFacebook.