Good food. Good drink. Poetry. Music. And Women, beautiful women.
Marseilles, vibrant seaport of sensual pleasure may be a French melting pot for those who come to seek better lives – Italians, Armenians, Neopolitans, Spainards, Vietnamese, West Indians, North Africans and Arabs, but it’s a crime-fillled simmering one, always on the verge of boiling over in Jean-Claude Izzo’s Marseilles Trilogy, a series that comprises Total Chaos, Chourmo and Solea.  Izzo, who wrote the series between 1995 and his death in 2000 has been called the father of Mediterranean noir. The re-lease of his books this month is part  the launch of Europa Noir. 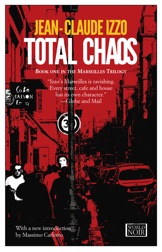 To find out more about Europa editions, go to http://www.europaeditions.com
https://www.facebook.com/EuropaWorldNoir