Fabio. He looks like a merman, a seductive creature crawling out of  the sea. Fabio Lanzoni, an Italian model, served as the inspiration for dozens of Romance novel covers, among other gigs.
Any man who crept out of the sea and looked at me this way would creep me out. I’d look away. Maybe even run away. 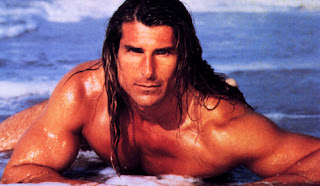 I testify: I am not now, nor have I ever been, a reader of romance novels. But I’ve been reading about another Fabio, Fabio Montale – a cop – and then ex-cop, the tragic hero of Jean-Claude Izzo’s Marseilles trilogy. I don’t know any other Fabios, so once I made this connection, I couldn’t get it out of my head.
This week I finished the trilogy and posted the second of three reviews as part of the Europa challenge.  I’ve now more than met my original goal in the challenge, and I’ve gotten hooked on Europas. http://europachallenge.blogspot.com
Europa editions are an international imprint released here by Penquin USA and self-described as “works of literary fiction, high-end mystery and noir, and narrative non-fiction from around the world.” http://www.europaeditions.com
Fabio Montale. He lives by the sea and loves Marseilles. He sweats pheromones and swoons whenever he looks at a woman.  He bothers me. Sometimes Izzo reads like (I imagine) a romance novel (would read). Here’s an encounter from Chourmo, the trilogy’s second book:
“All the time, my eyes were on her, devouring her.
I was being quite brazen. But it was more than the fact that she was beautiful. She was casting a spell over me. I felt it in my body. It was like an electric current. Like when you’re walking along the street and your eyes meet a woman’s, and you turn around, hoping to see than look a second time.”
He goes on. This is pretty much Fabio’s reaction to all the new (beautiful) women he meets. They, in turn, fall for him or at least he reports they do.
The constant swooning is a bit tedious and too much for my taste, but there’s a lot that I admire about the trilogy.
Other times the trilogy reads like: a travel novel, a foodie novel, a political novel, a detective story, a Mafia tale, a brooding essay on one man’s ideas about love and life.
Bottom line:  I’m loving reading Europa noirs for the breadth of vision they collectively provide. My reviews are posted.
Posted by Unknown at 6:51 AM