Back from the morning river walk with Riley. Dogs of all kinds and their owners gather every Sunday morning on the riverbank near the dog park in my community. The dogs leap and fetch sticks thrown to them in the Rivanna River at a small beach where the water is just slow enough so they don’t get swept away.
Riley, my Jack Russell terrier/Shih Tzu combo doesn’t swim so he spent most of the morning running the beach, rolling in the sand and eyeing Daisy longingly from the shore while she swam. Yes, he’s half-crazy over the love of Daisy. She, in turn, does her best to ignore him. 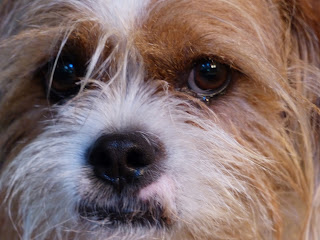 Riley is now flopped on the floor in the sun. So I have the rest of the day unrolling in front of me, with a couple of reviews to complete, and a new book to read. Finished Paul Doiron’s Massacre Pond. I knew Paul when I worked as a journalist in Maine and he headed up Maine Writers and Publishers Alliance. Since then he has moved on to lead Down East magazine – the magazine of Maine, where he has access to a treasure trove of Maine stories and locations. Also a Maine Guide, he knows the territory. Review to follow. I look forward to each new book.
Have just begun another book with a Maine connections, a Europa edition titled Three Weeks in December by Audrey Schulman that looks as if it is set alternately in Bangor, Maine, and Rwanda, and again alternately in 1899 and 2000. Already I’m distracted as the central character in the 2000 version is a ethnobotanist named Max, who has Asperger’s. I find myself busily comparing her symptoms with those of young women I knew who also had been diagnosed with the syndrome.  From my somewhat limited work with those both male and female with this diagnosis, I know one adage to be true: You’ve seen one person with Asperger’s Syndrome, you’ve seen one person with Asperger’s syndrome – that is that it manifests in very different ways. I also know that it manifests differently in girls/women than boys/men and that one of those differences is in the way eye gazing takes place.  So far, Max’s Asperger’s is more like the males I’m familiar with than the females. So I’m distracted. Max, like men with AS, doesn’t make eye contact – does that mean she has a mild form according to research? See link on research about eye gaze in girls:
http://www.autismspeaks.org/science/science-news/boys-and-girls-autism-use-gaze-differently-social-situations
Or does it just mean she’s just one person with AS? Probably the later, because I suspect this author has thoroughly researched the subject. But I, keep trying, like others, to understand what this word means—and how it’s different as I continue to encounter it in both life and art; increasingly we are meeting individuals and seeing characters on television and in books who are likely candidates for the diagnosis. See link:
http://flavorwire.com/405314/television-on-the-spectrum-the-best-and-worst-depictions-of-asperger-syndrome-on-tv
Sunday unrolled a little differently than I originally thought. I was interrupted before posting and spent the rest of the day away.