Reading: Finished Just Mercy: A Story of Justice and Redemption by Bryan Stevenson yesterday.  Stevenson, who has been called by the Rev. Desmond Tutu, “America’s young Nelson Mandela,” is a lawyer who since the 1980s has taken on the overreach  of the criminal justice system, particularly against the black men. He founded Equal Justice Initiative in Montgomery, Alabama, and initially worked to overturn the sentences of those on death row. He expanded that work to fight for mercy and justice for incarcerated children, women and the mentally disabled. 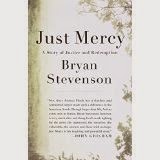 One of his earliest and most defining cases involved the trials of a black man, Walter MacMillian, who served six years on death row for the murder of a white woman, a murder he didn’t commit.  The miscarriage of justice, illegal manipulation and withholding of evidence by the prosecution, the Sheriff and others involved was so egregious that it makes for a great story, and has thus been told before on 60 Minutes (which played a role in Walter’s freedom) and by investigative journalist Pete Earley in an Edgar Award winning book, Circumstantial Evidence.  Ironically the murder and miscarriage both take place in Monroe County, Alabama, where Monroeville, the town and courthouse made famous by Harper Lee’s To Kill a Mockingbird.

Have just begun reading: Bessel Van Der Kolk’s The Body Keeps the Score: Brain, Mind and Body in the Healing of Trauma, a book that I’ve discovered from one of the yoga websites I belong to. The book has a few chapters that deal with yoga and body movement work, work that explores what is often referred to as “the issues in the tissues.” 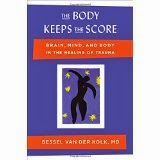 The book recounts Van Der Kolk’s work with veterans, survivors of sexual abuse and other forms of traumatic stress. Moreover, it explores the effects of that trauma and pathways to recovery – many of which are not pharmaceutical.
I don’t know why I am suddenly in this non-fiction mode, particularly one that looks at some of the most wounded parts of contemporary society. I’m feeling slightly assaulted by some very bleak statistics, even as I am hopeful and uplifted by work done in these fields. My immersion seems somewhat accidental, partly dictated by book group  (Just Mercy) – and I’m not sure how much more deeply I want to go in this direction.

SO, I am looking for something upbeat and maybe a good page turner. Dipping my toes into G. B. Edwards “The Book of Ebenezer Le Page,” which was recommended by my sister-in-law, Liz, to see if that might do the trick.  Or maybe I’ll order the new Neil Gaiman book.

Getting tired of: the cold in Virginia. I've been indoors too much this week.

Grateful: I’m not still living in Maine  (amidst a blizzard) this weekend.